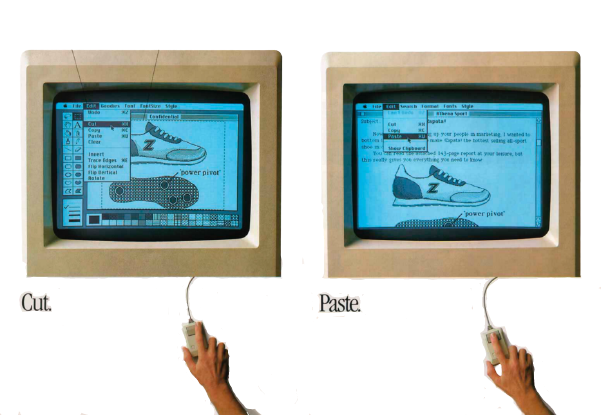 The Life and Death of Cut and Paste

BY
Paul Rony
MORE LIKE THIS
Kosmik, organizing organisations
April 15, 2021
The Future of the Desktop
April 23, 2020
Why you need Kosmik alongside whatever note-taking app you use
April 20, 2021

In our precedent articles we looked at how the computer desktop could evolve with cloud technologies and spatial interface. Today we look at another ordinary aspect of our computing life: cut and paste.

The origin of cut and paste.

Cut and paste became widely known as a computer feature when the Macintosh was introduced in 1984. Just as the Macintosh created a metaphorical desktop to allow users to move their files around, cut and paste reproduced a valuable technique used by editors, writers and knowledge workers around the world. Balzac famously kept a razor blade around his neck at all times to cut and re-arrange his writings.

The first Macintosh was bundled with two softwares, MacWrite and MacPaint. Early Macintosh commercials advertised cut and paste as a central feature of the new computer. Cut and paste was the way to create beautiful documents by mixing texts and images easily.

The ad showed how someone with very little computer experience could write a report in MacWrite and illustrate it with pictures and drawings from MacPaint by just « cutting and pasting ». The new cut and paste mechanism was magic paper in action.

The only problem is that the Macintosh (and then Windows, iOS, etc) cut and paste doesn’t work like our real world cut and paste.

We didn’t “transfer the paper metaphor so perfectly that the screen is as hard as paper to erase and change” but we’ve missed some of its essential properties : its physical nature.

In the real world when you cut a part of a document or a picture from a magazine, it doesn’t disappear only to re-appear when you « paste » it somewhere else.

The Macintosh designers tried to go around this limitation by creating a clipboard where cut content was saved. But the clipboard could only hold one object at a time. This may not seem like a big problem but I think every computer user can remember a time where he « cut » before pasting what was already in the clipboard thus replacing the clipboard content and losing some work…

In the real world, a clipboard is often used to keep several fragments of a text, or images. The worker can then recombine those element on a new sheet of paper and add modifications, annotations, etc.

Cut and paste had limitations back in 1984 that were never corrected !

Let’s sum up the main problems of current cut (or copy) and paste mechanisms :
1. The content disappear from the user document when it is cut.
2. The clipboard can only hold one object at a time, resulting in deleted content if the user is not careful.
3. When the source content is updated (like an image for a presentation), the user must copy and paste again to update the document.
4. The current system creates many duplicates, taking up valuable space and making research difficult.

In Kosmik we want to offer a new cut/copy/paste mechanism that resolves those problems. To design it we went back to 1974.

In 1974 a few months before the first “personal” computer (the Altair 8080) hit the shelves of the firsts computer dealers, Ted Nelson published a book that would go on to be the inspiration of many vocations in Silicon Valley. This book was « Computer Lib / Dream Machines ». It’s really two books in one.

In Computer Lib, Ted Nelson gives the reader a complete overview of the 1974 computer environment with dealers adresses and reviews of some of the hottest mini-computers of the time.

Ted Nelson designed windows at the same as Xerox Parc but with a different philosophy. People at Parc wanted to make computers usable by anyone. They had a goal: conceive the office of the future. Ted Nelson wanted to go even further: how improve on paper? And to do what paper cannot: to see the original context of any excerpt.

The main difference is that Ted Nelson windows were capable of being connected between them. They were not designed as containers for icons or representations of documents. The resulting design was dubbed « transpointing windows ».

Transpointing windows are capable of displaying documents side by side to allow comparisons. They are also capable of making connections to the original source of a specific paragraph or sentence. They can even outline changes in a revised version of a document. This is a very rough description of the power of transpointing windows, they’d ask for a full-length article dedicated to them only.

The principle that underpin transpointing window is « transclusion ». Transclusion was also invented by Ted Nelson in the late 60’s (Ted Nelson is considered the father of the hypertext concept, having coined the term in 1965).

In computer science, transclusion is the inclusion of part or all of an electronic document into one or more other documents by hypertext reference. Transclusion is usually performed when the referencing document is displayed, and is normally automatic and transparent to the end user. The result of transclusion is a single integrated document made of parts assembled dynamically from separate sources, possibly stored on different computers in disparate places.

Transclusion allows the user to build documents with fragments of other documents. This re-use of content from elsewhere is visually recognizable. Because, unlike copy and paste, the link to the original document is maintained and displayed. By embedding and not duplicating the content, transclusion saves valuable space and nullify the risks of duplicated files.

We called it « live copy ». When you select an object you can just tap « live copy » and another instance will be created immediately. This instance is the exact same object. When you change the content of a text that is live copied in three different documents, the content will be updated everywhere. When you apply a filter to an image it will be applied on all copies of this image.

As Kosmik uses a spatial interface you can visually compare and re-arrange live copies to create multiple versions of a document with very little effort.

If you « quote » something from another user (an image, a text, or whole document) we maintain the link to this orignal document. This way if you share your document, users can go to the origin of the quote.

With « live copy » we effectively resolve a lot of the present problems of copy and paste:

• The content doesn’t disappear when it is copied.
• When the source content is updated we update all the copies.
• We do not create any duplicates.

Live copy is not a simple copy and paste mechanism, it allow users to create complex documents with parts from other documents while ensuring that those parts will be updated and maintained.

Transclusion also allow for a very simple copyright mechanism. The name of the author is embedded into the file. It is very easy to know who wrote what and even to discover other creations from the same author.

In Kosmik we sought to make your desktop more easy to use, more powerful, and to host it in the cloud so you could take it with you anywhere. With live copy we want to go even further.

Live copy will give users the possibility to maintain connections between thoughts, and to link them to other thoughts. The virtual desktop may finally surpass the physical one.