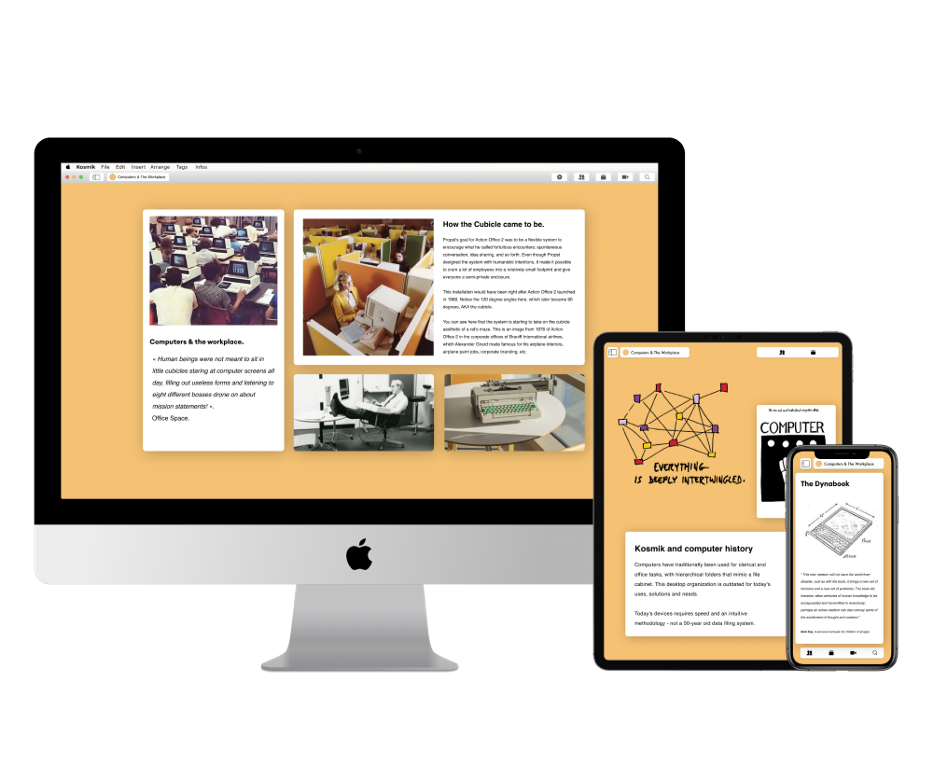 BY
Paul Rony
MORE LIKE THIS
The Future of the Desktop
April 23, 2020
The Life and Death of Cut and Paste
April 29, 2020
Why you need Kosmik alongside whatever note-taking app you use
April 20, 2021

Human beings were not meant to sit in little cubicles staring at computer screens all day, filling out useless forms and listening to eight different bosses drone on about mission statements !

This quote from Office Space seems especially relevant today. Even as we gradually move away from the cubicle. As we overcome the problems of the physical workplace, another kind of cubicle is surfacing, the digital cubicle. Workers suffer from badly designed digital tools and an ever expanding sea of files that is almost impossible to manage.

The modern worker main task is to « keep up » with the constant flow of e-mails, Slack messages and attachments he has to answer, keep track of and archive in a way that makes some sense.

The problems of the modern « knowledge worker » are not new. In fact they have been with us since the 1950’s.

In the 20th century, organisations changed radically. For the first time, white collar workers became more numerous than blue collar workers. This shift towards knowledge work happened in 1957 and was predicted by C. Wright Mills in his 1951 book White Collar: The American Middle Classes.

Organisations in the 21th century will change even more dramatically, especially since they will have to accept and adapt to remote and asynchronous work.

In the 1960’s, several challenges appeared for corporations:

The famous design firm Hermann Miller tasked Robert Propst, an anthropologist, to design a new office system to respond to the coming work apocalypse. After several years of work it took the form of the Action Office System.

Propst knew that, in the 60’s and 70’s, workers would need more privacy as well as a way to move freely around their offices.

Propst goal with the Action Office was to offer a flexible system to encourage what he called « fortuitous encounters » : spontaneous conversation, idea sharing and so forth. Even though Propst designed the system with humanistic intentions, it made it possible to cram a lot of employees into a relatively small footprint and give everyone a semi-private enclosure.

One of the innovation of the Action Office System was a desk with a lockable rolling top. This was designed by Propst and George Nelson so workers could securely leave documents on their table at night without having to put them back into file cabinets. One of Propst famous quote is :

The first Action Office wasn’t a commercial success. It nonetheless defined key concepts of the modern workplace. The furnitures themselves had been designed by the colorful George Nelson and were crafted with high quality materials, featured striking designs and were available in a broad range of colors.

Today’s knowledge workers must keep track of an enormous amount of informations across several apps, channels and folders. On top of that knowledge workers are quickly becoming « creative workers ». Creative work doesn’t refer only to creative professionals but to critical thinking, problem solving and cognitive flexibility.

The vast amount of data we have to process and recombine gives way to more new ideas. Those ideas are themselves processed and more date needs to be processed.

The modern worker not only gather file, process data, or knowledge. He makes sense of those data and must come up with new ideas, faster than the competition, in a clearer and better way. This is where our digital tools are lacking.

We need a tool for our creative process. Alone and in team. A tool to collect, archive and triage information. A tool where all this process will remain strictly private.

The creative process is a three steps one:

We created a spatial interface where you can just roam around like a physical space. Add images, videos, drawings. Layout everything in a beautiful way.

This ideation process can of course happen when you are alone but it happens a lot when you work with other people. This is what Robert Propst called fortuitous encounters:

“fortuitous encounter[s]” between employees fuelled creativity led him to design porous workspaces with plenty of meeting spots. When his magnum opus was released onto the American market in 1964, its clean lines, movable walls and swivel chairs were “received as a liberation.”

Kosmik was built for fortuitous encounters. In an interface this fluid, you naturally combine your material with the material added by your co-workers. Kosmik documents can even be published so the whole community can add or retrieve information.

Freeing workers from the digital cubicle

The debate surrounding productivity, collaboration and communication is really a debate around organisations themselves. The debate just moved into the Computer Age. Our offices are now digital. We can choose to work remotely, from home or in a coffee shop. Our workplace is in our pockets and backpacks. We still have cubicles, they are just software ones.

Give it a try and let us know if your creative process got better.