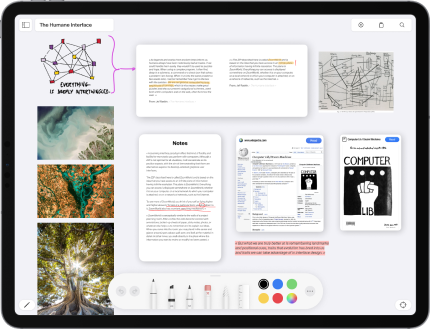 Why you need Kosmik alongside whatever note-taking app you use

BY
Abhishek Agarwal
MORE LIKE THIS
Kosmik, organizing organisations
April 15, 2021
The Future of the Desktop
April 23, 2020
The Life and Death of Cut and Paste
April 29, 2020

Kosmik is an art-board-style note-taking app. It is akin to a whiteboard transformed by all things digital, all things web-native, all things Internet. Such a new paradigm introduces a whole new set of creation flows and in our explorations, we’ve already seen some unprecedented possibilities.

As a base sense, Kosmik’s Artboard should lend you the general feeling of “I can throw any object at the artboard and it will stick.” The digital objects could be anything you can imagine and at Kosmik, it is our burden to enable you to bring anything you wish. So far, we support images, text-boxes, annotations, web-page links (with preview) with a lot more to come. Notably, we also support import of files with Live-Preview represented on the artboard for you to play with. You can be working with all of these objects to let your output emerge on the artboard, which, within the app we refer to as a Universe.

The Kosmik Universe is your infinite, digital playground to put objects together, manipulate the objects and the relationships they share with each other, as you let the many become one until the One emerges out of the play.

Today if you ask about the tools of the most creative and productive Knowledge Workers in the world, they would lead you to their preferred note-taking-APP-managing-huge-knowledge-bases as the instrument of their workflow. These are the modern text-first, block-based note-taking apps like Roam, Notion, Obsidian, etc. If you were to walk into their offices, you will find these apps perpetually running on their computer. The rest of the office will most likely look like a colorful playground covered in sticky notes and whiteboards. (I can say something similar about my office.)

Now, there are about half a dozen note-taking apps installed on my computer as I write this essay, sitting in a room surrounded by white-boards. And so it is a fair-question to ask if I really need Kosmik. Does Kosmik replace something? Or does it add to the existing setup? How does Kosmik influence the logical form of my creativity in a novel way? What makes Kosmik a new instrument?

When I sincerely asked if I need Kosmik, for myself, for my creativity, I ended up writing this essay. In this essay, we will first see the structural logic within bodies of knowledge and then see, Kosmik allows you to play with knowledge.

To begin this essay, we must first find some common grounds as to how knowledge workers capture knowledge in the digital medium.

Creator of the famous course, Building a Second Brain, Tiago Forte describes a digital note to be “a knowledge building block — a discrete unit of information interpreted through your unique perspective and stored outside your head.”

To put it another way, when we talk about working with digital notes, we’re basically thinking about playing with Knowledge Legos. Yay!!! Now, I will of course be using Legos instead of digital blocks, going forwards…

In the digital world, you quintessentially deal with Legos of information, blocks of 0s and 1s, which can then be sequentially assembled into a “page”. The “page” is of course infinite in length.

Blocks of information is a departure from the “words on paper” analogy that all word-processors and previous-gen note-taking apps like Evernote and ZimWiki are designed around. The way of Knowledge Legos is a digitally-native, first-principles arrival in the thinking behind modern note-taking apps.

Now the structural complexity of Personal Knowledge Management systems can be (quite, surreally) reduced to two simple logic for organizing our Knowledge Legos: Networks and Hierarchies. The verbs here are Connecting and Containing legos respectively. The legos can be contained into each other to form Hierarchies and can be connected with each other to form a Network of information.

Connections have a context, and Legos connected by the same context, can also be contained under that Context. This way, Hierarchies emerge out of Networks, and by similar logic it is easy to deduce how Networks can emerge out of Hierarchies.

We contain (Hierarchies) and connect (Network) Knowledge Legos under a Context to create a Knowledge base. Here, Roam Research (and the like) operates on a text-based context while Kosmik is based on a Spatial Context.

The context is expressed in #Tags or [[ Page-Title ]], on note-taking apps like Roam Research and other similar apps. This is textual context which is distinct from the Spatial context our creators will express on the artboard of Kosmik Universe.

The Spatial Context of Kosmik, as we will see in the next section, provides a novel-logic for the user to play with Knowledge Legos in the digital space. The Networks and Hierarchies of your Knowledge Legos emerge in a whole new way on the Kosmik Universe.

How does Kosmik influence the logical form of creativity in a novel way? What makes Kosmik a new instrument?

Among PKM-nerds, we often talk about Roam Research in the same vein as Notion and Obsidian, but there’s a foundational difference that sets Roam apart — it introduces a novel creation flow uniquely enabled by it’s digitally native play with Knowledge Legos. While all these apps are text-based and a user will find himself creating on the canvas of a page, where Roam starts to differ is in the choice of “elementary particles”.

Roam handles the atomicity of knowledge at the Block level, while apps like Notion and Obsidian is at the Page level.

On Roam, you’re in essence always working with a Digital Block. And while Notion and Obsidian pages appear like they are made of Blocks too, it is only in Roam where you are always creating Networks and Hierarchies with Knowledge Blocks. This directly stems from our First-Principles Thinking for Knowledge Bases and Roam’s implementation has the affect of putting you in a new logical flow to work with your ideas. Famous online writer, media theorist and writing coach, David Perell describes Roam as “programming for writing”.

Two structures permeate reality: Network and Hierarchies. By always creating these structures while working with digital blocks of information within Roam Research, you experience a novel logic into your creativity. A new way to work with your ideas. Now what Digital Blocks is to Roam, Digital Objects is to Kosmik, albeit interacting in a Spatial Context.

A Complimentary Paradigm – The Kosmik Universe

The base act of organizing in Roam Research is [typing labels] to contain/connect your Knowledge Legos on a linear page. The base act of organizing in Kosmik is simply placing digital objects near each other on the artboard surface (Universe). You can create a bundle around these clusters of objects and add more objects to these bundles. You can then connect these bundles with each other, all on a infinite, digital surface. These spatial arrangements holds an intuitive logic that goes beyond language, and is akin to how we design the world around us and mental images within us.

While we’re still figuring out useful ways of navigating a networked graph, the primary mode of retrieving knowledge in Roam Research and the like, remains text. You send “keywords” through your system and it returns back notes. You connect and contain blocks in a textual context. You jump around the system on the vehicle of Language.

Kosmik makes a fundamental shift by being a visual-first, artboard-based medium we call the Kosmik Universe.

In Kosmik, you can place any digital object onto the Kosmik Universe (the digital surface). We’re already providing support for Files*, Web pages, embeded Multimedia, and Free-Hand Annotations, and are working to support virtually any digital object our users might bring.

You navigate a Kosmik Universe in a Dive-and-Surf Navigation UI where-in, you zoom-in/zoom-out and laterally move across the space. This is a different kind of immersion into a Knowledge base than what you experience from looking at a page.

While writing long essays like this one, it becomes hard to manage all the ideas on a linear page. Before Kosmik, I would create sticky notes for each idea and arrange them on my Whiteboard. Then, I will constantly move them around while structuring my essay and understand and make novel connections among my ideas based on spatial relationships I see among them. Today, I do the same thing on Kosmik but transformed by all things-digital.

While physical whiteboards at-best act like a sidekick, the Kosmik Universe is where I begin and end my projects. I throw objects collected from all across the web and from my textual Knowledge base onto the Kosmik Universe and continuously move them around while directly working on them as my projects take shape. This is an unprecedented workflow for the modern knowledge worker.

Kosmik offers a novel, spatial-way to associate any two-pieces of information in the digital-verse and navigate the emergent layout accordingly. Such mental shifts tends to completely wash over your creativity.

Spatial Arrangements holds a meaning that bounces from an intuition within us in a way that cannot come through words lined up on a paper. This further implies that Kosmik and Roam can and must be used in conjunction to produce my work. One can simultaneously create containers and connections on the visual medium of Kosmik Universe and the output can emerge bottom up into all sorts of organizations, [including all the standard org charts we already know].

Visual Illustrations provides a meaning inherent to how we understand our ideas and with Kosmik, this sense of meaning-making can become a part of every Knowledge Worker in the digital-verse.

The creation and navigation flow of Kosmik is disjunct from Roam.

*Files can be imported in Kosmik, and (whenever meaningful) we generate a representation of the file for you to work with. The files must be opened from within Kosmik to edit and see changes reflected in representation.

A New Medium to Massage Your Brain

In my workflow, Kosmik’s Universe is the Playground. I constantly retrieve notes from my Roam Knowledge Base and start throwing them onto the surface. I’ve an iPad that allows me to be more physical with the Universe as I annotate, move objects around with my finger and start realizing a [mind map sort of a thing] to my essay. Here, I wouldn’t be surprised if these visuals eventually start making their way into a few essays.

In fact, I think the visuals will definitely start making their way into the essays. Our brains have a way to begin orienting the expression as per the medium it communicates in. We shape the tools and then the tools shapes us [Or, Medium is the Message as Marshall McLuhan explained].Kosmik offers a novel, spatial-way to associate any two-pieces of information in the digital-verse and navigate the emergent layout accordingly. Such mental shifts tends to completely wash over your creativity.

When, say, I’m writing an essay, Kosmik allows me to externalize the structure of my work outside of the page. Kosmik offers a freeform, digital surface to structure not just ideas, but “smart” digital objects.

Any creative work tends to be a emergent product of some ideas that simmers within your unconscious mind. These are weaved together by your intuition in interesting ways and emerge out of you in an almost magical moment of creative flow. Kosmik effectively gives you a new instrument for Weaving. As a result, Kosmik will inject novel visual images of the knowledge you care about into your intuition; first-slowly and then all-at-once, as you get immersed into the playground of Kosmik Universe.